Biography
THE CITIZEN OF THE WORLD 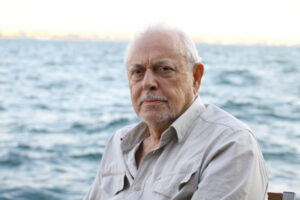 He has been living in Paris since 1955 were in 1967 Graduated from Ecole Supérieure des Arts Modernes, Paris, with a degree in «Interior Design and Architecture».

During the period 1957-61 he studied painting in the Académie de la Grande Chaumière, Paris and Notre Dame des Champs, Paris with H. Goetz.

In 1996 he began working and living both in Paris and Athens.

Whilst still a student, he introduces new methods, such as fire and the burning of pigment. The element of mechanical repetition and the introduction of ‘objets trouvés’ (‘found objects’) is already present in his work in 1964.

In 1967 he participated, on the one hand, in the subversive exhibition “Light and Motion” at the Museum of Modern Art in Paris and on the other, in the “Superlund” in Lund, Sweden, curated by the famous art critic Pierre Restani.

In 1968 he created a large kinetic environment in the well-known exhibition “Expansions et Environnements”, collaborating with Tingeli, Cesar, Nicki de San Falle, etc., at the Galliera Museum, in Paris.

In 1969 he made his first solo exhibition at the Sôdertälje Konsthal in Sweden and organised in Paris the spectacle “EC-STASIS”, with electro-kinetic sculptures and electro-acoustic music.

From 1971 to 1973 he taught at the Schiller College, in 1973 at the Hochschule für Bildende Künste in Berlin and from 1973 to 1996 at the École Normale Supérieure de l ‘Enseignement Technique -ENSET (Cachan, France). In 1976-1982 he became a member of the Postgraduate Examination Committee of ENSET and in 1978 he was appointed a member of the Examination Committee for the postgraduate studies in Fine Arts.

Xenakis participates in very important international and group exhibitions. In 1971 he makes his first solo at Goethe Institute in Greece. In 1978 he participated in the exhibition “Letters, Signs, Scriptures – From Russian Constructivists to the Modern Age” at the Malmö Museum in Sweden and in 1980 at the “Maps and Faces of the Earth” at the “Centre Pompidou” in Paris.

In 1980, with a scholarship from the Ministry of Culture of France, he organised his solo exhibition “Fifteen Years of Semiotic Art” at the Cultural Center of Mont Saint – Aignan. In 1982 in Paris he designed the settings for the dance performance “La grande journée”.

In 1985 he carried out a large-scale project for the Sewage Pumping Station in Crosne, France, by using on the exteriors, ideograms, signs and codes, referring in a way to Egyptian and European cultures.

In 1986 he was awarded the “Knight of the Order of Arts and Letters” of France and in 1988 received an honorary distinction from the National Museum of Contemporary Art in Seoul. In 1996, as a nominee by the French Academy of Fine Arts, he was awarded the Delmas Prize.

In 1990 the film “Constantin Xenakis: Presence du Signe” was screened in Paris. He participates in the big group exhibition “Fifty Years of Thinking and Seeing in Contemporary Art”, in Aras, while in 1991, the “Constantin Xenakis” space is inaugurated in the Social Center of Fameck, France. In 1995 he exhibits in Athens “The Book of Life (Chapter A’)” as the first part of the eponymous. trilogy.

RETURNING TO HIS HOMELAND

In 1996, forty-one years after his departure from his birthplace (1955), and on the initiative of the Hellenic Cultural Foundation, his retrospective exhibition under the title “The Return of the Artist” was inaugurated at the Museum of Fine Arts of Alexandria and in 1997 at the Hanager Arts Center in Cairo.

RETURNING TO HIS FATHERLAND

Since 1996, he spends his time between Paris and Athens. In 1997, in the context of “Thessaloniki: European Capital of Culture”, he exhibits “The book of life Chapter II, Alexander the Great and I”. In 1999 he participates in a big exhibition on the occasion of the celebration of the “100 years of the National Gallery” in Athens.

In 2001 he participates in the Athens art fare “Art Athina”, with a solo exhibition.

At the Athens Olympic Games in 2004, in a group exhibition called “Athens by Art”, he presents a marble sculpture named DII OLYMPIO, which means “Dedicated to the Olympian Zeus”. In 2005, he participates in an exhibition at the National Museum of Contemporary Art in Athens called “The Years of Controversy in Greece – The Art of the ’70s”. In 2006 he presents the “Street Code” at the Museum of Modern Greek Art in the island of Rhodes and “Structures and Codes” in Herakleidon art space in Athens.

In 2009, with the exhibition “Constantin Xenakis: Routes”, important milestones of his artistic career are presented at the Municipal Gallery of Chania.

EXHIBITING ALL OVER THE WORLD

In 2010 and 2015 he organises two very important solo exhibitions in Thessaloniki, in the Museum of Byzantine Culture and the Archaeological Museum respectively, where he juxtaposes   his works with archaeological exhibits in the museums’ permanent collections.

In the meantime he participates in the 3rd (2011) and 5th (2015) Biennale of Contemporary Art of the Center for Contemporary Art in Thessaloniki, as well as in group exhibitions of the “House of Letters and the Arts” of the Onassis Foundation, the National Gallery and the “Foundation of Fine Arts and Music, V. and M. Theocharakis” in Athens.

In 2014, with the exhibition “No Way Out” at the premises of the Greek Permanent Representation of the OECD in Paris, he does not hesitate to critically comment on the present and the future of the European Union.

DONATING HIS MOST VALUABLE IN SERRES

In 2016 he presents two solo exhibitions on the one hand a restored Ottoman monument of Serres, the Zincirli mosque and on the other in a ground floor store of the Commercial and Industrial Chamber of Serres. The aforementioned exhibitions constitute the forerunner of his donation to the city, after the encouragement and personal efforts of the architect-surveyor-engineer-transport specialist and collector of his works, professor at the Aristotle University of Thessaloniki Aristotelis Naniopoulos.

The donation of 171 works was notarized in 2020, shortly before the death of the artist. Unfortunately Xenakis, did not live to see the completion of the Contemporary Art Museum “Constantin Xenakis”. However, he had a complete image of it, having worked together with the museologists of the project, professors Mrs. Matoula Scaltsa and Mr. Panos Tzonos, both at the stage of the creation of the exhibition narrative and its exhibition design, approved by the artist in three-dimensional illustrations.

The project «CULTURAL DIPOLE» is co-funded by the European Regional Development Fund and by national funds of the countries participating in the Cooperation Programme Interreg V-A “Greece-Bulgaria 2014-2020”.